“Morotomo” (もろとも), an anthology of short stories by Indonesian migrant workers in  Japan has been launched. Anastasya Wulandari Hasyim, BEBESEA Story Fellow conducted a Short Story Contest for Indonesian Migrant Workers on a platform established by her called Iza Migrant Rights (@izamigrantrights), and compiled selected 15 best stories into this anthology book as a part of the fellowship program. 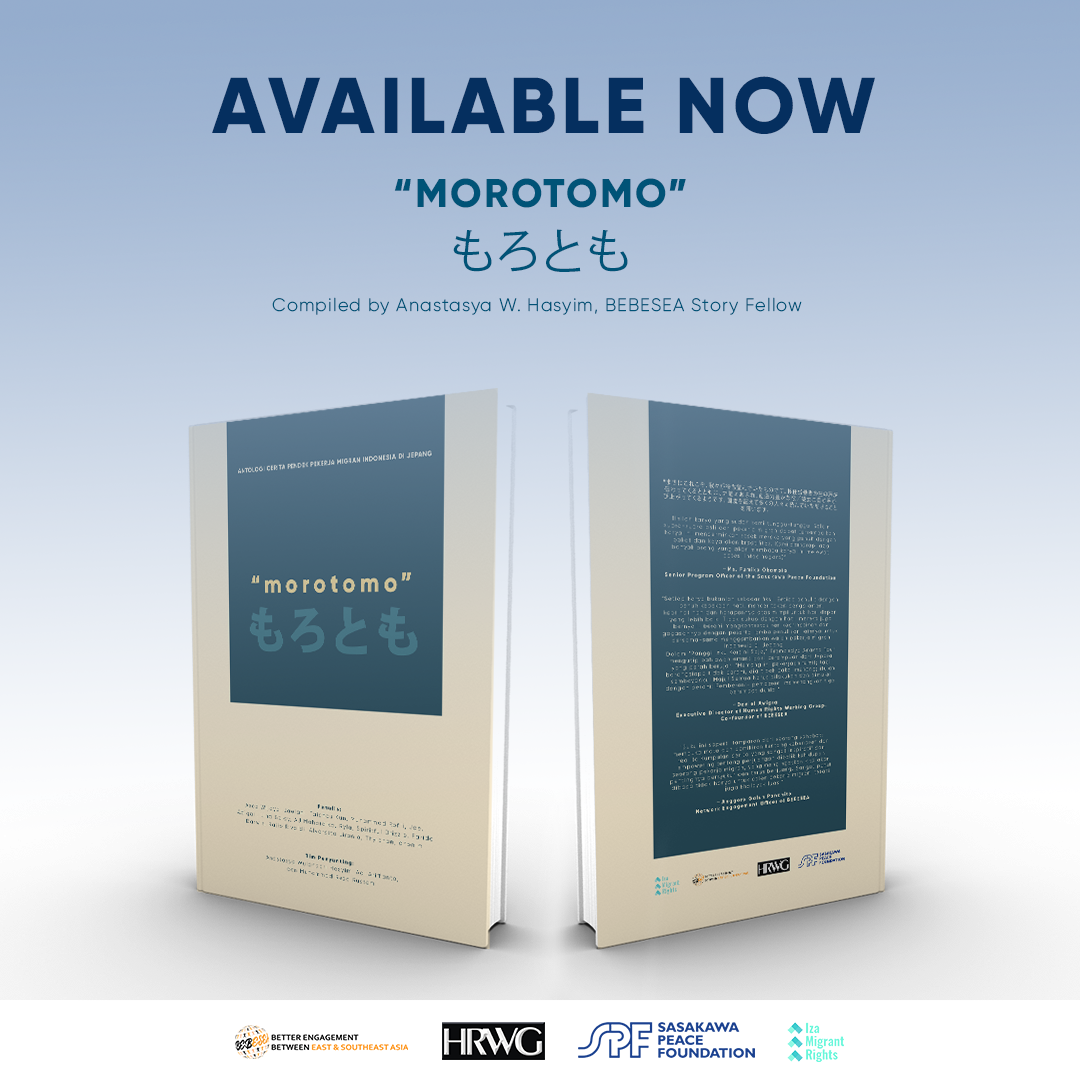 During her work supporting Indonesian migrant workers in Japan, she had a chance to accompany some workers as a translator while they were interviewed by a well-known Japanese newspaper regarding their dispute with their receiving company. However, after the news article was published, there were too many stories that remained untold. Anastasya realized that, “If it is not YOU – yourself – who writes your own story, no one will be able to perfectly describe and depict your experiences and struggles.” This is when she remembered a quote of her favorite author, Andrea Hirata in his book Sirkus Pohon (The Tree Circus) – “Fiksi, cara terbaik menceritakan fakta,” which means “Fiction, is the best way to convey the truths.” These have motivated her to start the project – the Short Stories Anthology Book by Indonesian Migrant Workers in Japan.

Anastasya commented that her experience of participating at BEBESEA’s previous workshop has given her many insights, such as “Always to include migrant workers in discussions about them.” She believes that the readers can enjoy the raw emotions depicted in the stories as they are written by migrant workers based on their own experiences. Iza Migrant Rights only served as a facilitator to empower them to share their stories through the power of literature.

The title “Morotomo”（もろとも・諸共） means “To each other”. The title was picked from one of the poems in Ogura Hyakunin Isshu (Anthology of 100 Classical Japanese Poems):

“Please, let us be nostalgic towards each other, oh Mountain Cherry Blossoms.

There is no one else who knows me as cherry blossoms do.”

This anthology of short stories intends to be one of the “Cherry Blossoms” ​​who recognizes and validates the struggles of Indonesian Migrant Workers in Japan.

The book is also going to be printed and published in Indonesia March 2022.

Greetings! This is a monthly update from BEBESEA to our valuable friends, colleagues and resource persons who have participated in and supported our activities.   News from BEBESEA: Upcoming Event: A public policy discussion “The New Southbound Policy and Its Impact...

Public Policy Discussion: The New Southbound Policy and Its Impact on the Life of Migrant Workers in Taiwan

The majority of Chin people inhabit in the hilly mountain areas of Chin State, in the western region of Myanmar, near the border with India. The Chin people are comprised of 53 subtribes and have different dialects and diverse cultures. For centuries, the Chin...